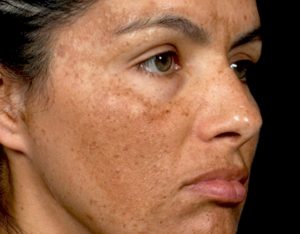 Melasma (muh-LAZ-muh) is a common skin problem. It causes brown to gray-brown patches on the face. Most people get it on their cheeks, bridge of their nose, forehead, chin, and above their upper lip. It also can appear on other parts of the body that get lots of sun, such as the forearms and neck.

One of the most common treatments for melasma is sun protection. This means wearing sunscreen every day and reapplying the sunscreen every 2 hours. Dermatologists also recommend wearing a wide-brimmed hat when you are outside. Sunscreen alone may not give you the protection you need.

Women are far more likely to have it than men. It is so common during pregnancy that some people call it the mask of pregnancy. Hormones seem to trigger the brown spots. Melasma does not cause any symptoms (what people feel). But many people dislike the way it makes their skin look. Common signs (what you see) are brown or gray-brown patches on the face. These patches most commonly appear on the:

Women are much more likely to experience the darkened skin much more often than men. Just 10% of people who get it are men. People with darker skin, such as those of Latin/Hispanic, North African, African-American, Asian, Indian, Middle Eastern, and Mediterranean descent are more likely to see the dark spots, as are people who have a blood relative who had them.

What are the causes?

The cause is not yet clear. It likely occurs when the color-making cells in the skin (melanocytes) produce too much color. People with skin of color are more prone to melasma because they have more active melanocytes than those with light skin.
Common melasma triggers (what starts it) include:

Topical medicines and laser treatments can greatly improve the appearance of melasma.