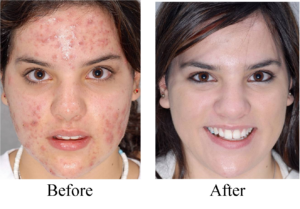 Myths about acne are as common as the skin problem. Acne can appear on the back, chest, neck, shoulders, upper arms and buttocks. One common myth is that you have to let acne run its course, however Dermatologists know that letting a skin disruption run its course is not always the best advice. Treatments include oral and topical medications, along with treatments using light and exfoliation. Depending on your skin type and the level of infection, your doctor will recommend a path of treatment that may combine several different treatments.

• Without treatment, dark spots and permanent scars can appear on the skin as the disruption clears.
• Treating acne often boosts a person’s self-esteem.
• Many effective treatments are available.

Acne is not just a teenage problem and a growing number of women have break-outs in their 30s, 40s, 50s, and beyond and sometimes there is no explanation for the disruption.  Dermatologists are not sure why this is happening - it could be environmental, stress, hormonal or other changes. At any given time, 40-50 million Americans suffer from acne, and we understand that this can be particularly frustrating.

Many people think that acne is just pimples. But a person who has a breakout can have any of these blemishes:

Sometimes bacteria that live on our skin and get inside the clogged pore providing a perfect environment for multiplying very quickly. With loads of bacteria inside, the pore becomes inflamed (red and swollen). If the inflammation goes deep into the skin, a cyst or nodule appears.